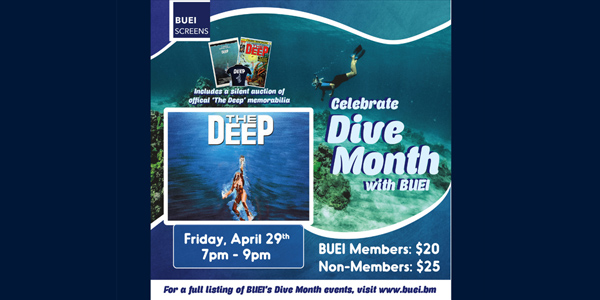 On Friday [April 29] BUEI will host a special screening of the adventure film ‘The Deep’, which was partly filmed in Bermuda.

“As we close out Bermuda’s Inaugural Dive Month, we are extremely grateful to have had the opportunity to host four events throughout the month of April which not only highlighted the wonders of diving in Bermuda, but brought people together, created numerous conversations around diving, built networks and carved out pathways into Bermuda’s diving community,” said Karla Lacey, CEO.

“To round out the series of events we are thrilled to present a special screening of ‘The Deep’, a film filled with history, entertainment and adventure along with a silent auction of memorabilia from the film with part proceeds from the auction to benefit BUEI programmes.”

“‘The Deep’ is a 1977 adventure film based on Peter Benchley’s 1976 novel of the same name. It was directed by Peter Yates, and stars Robert Shaw, Jacqueline Bisset and Nick Nolte.

“The original concept was developed from the story of a Bermuda shipwreck, the Constellation, which sank in 1942, carrying ampoules of morphine among other war cargoes, such as concrete and pharmaceuticals. Constellation sank after possibly striking the wreckage of American Civil War blockade runner Montana, which Peter Benchley described as having sunk one on top of the other.

Trailer for The Deep

“Filming began in July 1976 with open water diving sequences off Black Rock Point, Salt Island, near Peter Island, the location of the real shipwreck of the RMS Rhone in the British Virgin Islands. By August 1976 the production was filming land sequences on location in Bermuda. Other scenes were filmed at the Great Barrier Reef in Australia.

“After Shaw suggested that the film would be more realistic if the filming took place underwater, the entire cast and crew were taught how to scuba dive and filmed their scenes underwater. Although some scenes were shot in the real Caribbean Sea at depths of 80 feet, many of them would ultimately be filmed in underwater sets to eliminate the need for decompression.

“The production was responsible for a number of technical firsts, including Al Giddings’ Petermar camera system and the use of specially modified 5000-watt “Senior” luminaires to provide cinematic lighting underwater. The world’s biggest underwater set was dug at the summit of a historic Bermuda hill formerly known as Hospital Island at Ireland Island South. Ireland Island is the north-westernmost island in the chain which comprises Bermuda.”

“I would also like to thank the Bermuda Tourism Authority for their involvement in shining a bright light on Bermuda as an internationally recognised diving destination. We look forward to the return of Dive Month Bermuda next year!” said Karla Lacey.

A spokesperson added, “As part of the Bermuda Tourism Authority’s [BTA] ‘Dinner Date & Dive’ promotion, tickets for ‘The Deep’ are $40 for BUEI Members and $46 for Non-Members. Each ticket includes entry into BUEI’s Ocean Discovery Centre from 6pm-7pm with a complimentary beverage courtesy of Gosling Brothers, bag of popcorn courtesy of GlamPop, and a tasty selection of hors d’eouvres.

“The silent auction will take place during the cocktail reception at 6:00pm, and the film will begin at 7:00pm. Please call 294-0204 or visit ptix.bm to secure your tickets. For a full listing of BUEI’s Dive Month events, visit www.BUEI.bm.”