I may be biased; my ancestors were amongst some of the very first to settle in Bermuda, in 1609. My family therefore (on my mother’s side) are Bermudian through and through, something of which I am very proud! And if you’ve been to Bermuda, you will know why. The island is paradise. A surreal place, somewhat isolated in the North Atlantic Ocean, it is beautifully bordered by its pink sands, which lead into the most glorious turquoise waters. Just 22 miles in length and one mile across, the tiny island is made colourful not only by its surrounding waters, but as much by the multi-pastel houses that sit scattered across the hills and along the coastlines, each one crowned with a glistening white roof. Not solely for aesthetics, Bermuda’s trademark white roofs are all white for a very important purpose – collecting rainwater; The white cement wash compound sanitises the rainwater as it runs off into a holding tank – an eye catching solution to a lack of fresh water. The landscape could not be more picturesque, and with every inch being a picture perfect moment, Bermuda should be explored.

After an 11 year wait since last visiting in 2005 with my family, I knew what I wanted to get from this trip – I wanted to see it all, the entire island! As captivating as the white beaches are – and they really are – I didn’t want to just spend the days lying on one beach; as equally blissful as that would have been, I wanted to make this holiday a mini adventure.

And that we did, hiring a scooter (a must do in Bermuda), we hopped from hidden bay to hidden cove, we scooted from the east to the west, exploring all the little streets that lay in between. Our ‘scoot’, although somewhat temperamental, gave us complete freedom. But you can’t go everywhere via the roads. . . To go ‘behind the scenes’ as it were, you have to pedal. . .

After hiring the pedal bikes from a – rather strange, if-not-a-tad-too-grumpy, German-sounding man – we set off. Cycling in paradise awaited. However, as I quickly learned, if you really want to see all of paradise – you’re going to have to work for it.

The route, as with most cycle paths, runs along the country’s old railway line. We chose the north route as it ran along an area of coastline we had yet to discover. Unlike my local Bristol to Bath cycle path in England, this path was slightly more ‘unruly’ shall we say – perhaps adding to the scenic beauty, this did make for a more challenging experience, especially when one stupidly wears flip flops (a grave error). Further to the ‘jungle-like’ conditions (I exaggerate), raised barriers block the route every few metres, to ensure the path is kept clear of motorists. This means, that at every few metres, one must dismount and lift the bike over/around the barrier, in order to continue. Easy enough, were it not for the heat! . . . Laying on the beach can be taxing in such temperatures, never mind cycling – and lifting! The effort required to do both activities in such a temperature, along with amount of sweat that came with it, certainly took some of the romance out of it, only to be saved by the views; we passed beautiful houses and gardens on our right, whilst on our left lay a blanket of turquoise, stretching out in ripples for as far as the eye could see – we were even lucky enough to see some of the island’s green sea turtles. It felt magical to be cycling in such an environment (facial sweat aside).

Further along, there were sections that took us on to the road, and a particularly lovely section was through Flatts Village, past the island’s aquarium. The area is one that perfectly displays the ‘postcard’ image of Bermuda’s pretty, colourful houses. We cycled up through the north of the island, turning around at the tip (St George), where we begun our journey back. Now, it wouldn’t be one of my bike rides without a fall – and how fitting to be in Bermuda, and for the fall to occur in the sand. Note – don’t attempt to turn bike tyres in sand, it will only end in a highly embarrassing nose dive, in front of sunbathing locals. Never have I felt such the fool! The embarrassment, combined with the heat, exhaustion, sweat – did result in some tears, and it was down to the views again to save the day. & that they did. . . 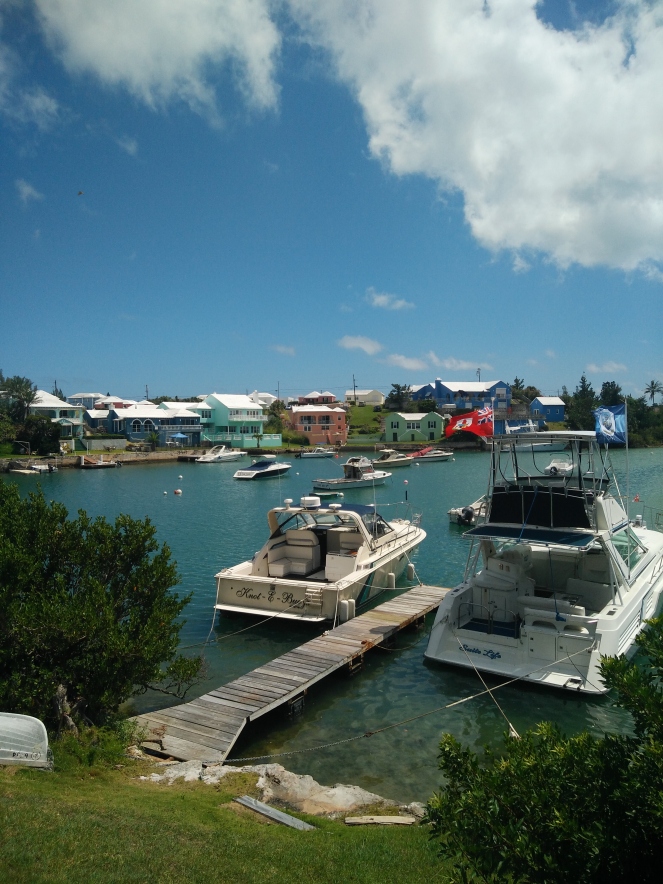 The route back to the centre of the island was particularly tough, as the heat became engulfing. Turns out I’m not so good at cycling in high temperatures! When we arrived back in Hamilton – the island’s capital, after some gruelling hills, we had the option to either continue and cycle the South route, or call it a day. I’m afraid I needed the beach at this point and so we called it quits. In total I only managed 3 hours of cycling, but those 3 hours, although more taxing than I had anticipated, were amazing – a bike ride I’ll never forget!

We stayed in a little, pink self-catering cottage in Paget. It was like a little home away from home, and centrally located it was an ideal point to explore the island from. Booked via AirBnB, our hosts were amazing!